I am a happy girl☺

With daily tidying, there would be no mountains, no mess, no monsters.

NEW YEAR’S DAY makes me nervous. Once school starts, everything will get more difficult. This coming year, the school is going to put me in a different class, and I cannot be sure if I would be in the same class as my best of friends. Another thing that gets me edgy is that weird feeling of having forgotten something I had learned the year before.

Will I do well? Will I do worse than last year? Will I win the 80-dollar voucher for being one of the top 25 percent in the level? So many things to worry about! It doesn’t help that the word “scared” is looming over me like a dark cloud.

Sometimes, when the worries get too much, I’d tell myself, “Oh I don’t care!” or “Never mind!” This is a great cure for all the silly whirling in my head. Better to spend time on real dreams than awful worries. And so, here are my Big Dreams for 2018.

The biggest thing I want to do is to master the guitar, good enough to play Ed Sheeran’s Shape of You. The idea is to play this song to my kid brother, Amos, on his birthday in August. Sometime last year, I had asked him, “Would you rather that I get you a birthday present or play you a song on the guitar?” I don’t mind either way, he said.

So Ed Sheeran it would be. I have eight months to master the guitar. I am not a fan of the song, nor my kid brother, but it’s a pretty good deal if I don’t have to buy a gift for him just by crooning a Sheeran hit.

My next big dream is to improve my spelling. I want to work on at least one problematic word a day. Presently, my spelling drill goes like this: In my spelling book, I would make a word entry on the top right-hand corner of the page—the weird way I would write a word: expesially, for instance.

Then, on the top left-hand corner of this same page, I would write the correct spelling: especially. On the rest of the page, I would fill up all the lines with a million correct versions of the word. It is like a meditation. The moment I lose focus, I would make a mistake, which is exactly what happened with “burgalar” recently. Look what I did:

Pretty silly, right?  After just three words, I trip up. That’s not going to happen in 2018. At least, I’m going to do everything I can to avoid such silliness.

The last important New Year dream is for me to be neat and organized. I don’t even know where or how to start with this one. It’s a monster! But I know I would get somewhere just by putting my mind to it. I am going to enlist the help of my dad and Therese, my elder sister. I am also going to adopt the motto of my writing teacher, Miss Viv: Tidy every day, and not when you have a mountain of mess. With daily tidying, there would be no mountains, no mess, no monsters. Besides, tidying is like a meditation.

And who knows, when I get into the groove of being a little neater, maybe the burglars would forever be spelled the way they should be spelled. 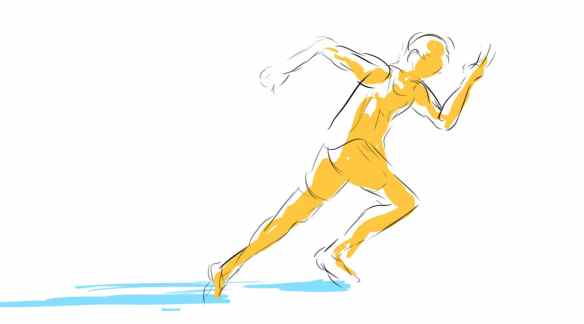 COMPETITIONS make people nervous. Even our Olympic gold medallist, Joseph Schooling, must probably feel nervous all the time. I, too, was filled with anxiety the day before our Sports Day. I had to run the 200-meter race in the Primary Four category. I am the fastest in the yellow house, but not the fastest in the level. I am less than a second slower than Boon from the blue house. I so want to beat him and I so want to shatter my 31.86-second personal best.

The day arrived and the moment arrived. We’ve got our fingers on the track and our feet planted on the starting plates.

The digital gun made a metallic sound, and off we went. I had a great start, a split-second faster than Boon. My legs were agile and swift, and the balls of my feet had a bounce, all light and nimble.

By the time I crossed the 100-meter mark at the bend, I had the feeling that the gold medal was mine. But when we got to that final home stretch, Boon and I were neck and neck. Presently, my legs sprinted even faster and I could feel the wind on my face and my body. I felt as if I were faster than my legs could carry me, so fast that I was delirious.

The finishing line was there—ten, twelve strides away. The gold, the gold! That was all I was thinking about. Then, I hurtled forward, my feet buckled somehow. Next I knew, I felt a crash on my chin and a sharp abrasion on my arm and on my palms.

I lost. I didn’t even get the silver, nor the bronze. To say I was disappointed would be an understatement. I was devastated. My teammates rallied around me: “It’s OK, Sam! You ran your best.” I knew I did. I may not have won, but it’s not the end of the world.

At the next race, I’m going to get Boon. Just you watch.

This essay was written in response to four boxed pictures:

MY daddy’s got a boyish face,
So young you’d think he’s thirty-five,
But he’s on the wrong side of forty,
Wise in the ways of the world—and math.

Guys aren’t supposed to smell nice,
Daddy’s no exception.
But guy smells don’t change the way
I feel for him.

When friends ask me:
“So, what does your Daddy do?”
I wish they had a dictionary
To look up “audiologist.”

That’s very simply an ear expert,
One who helps folks hear better—
The deaf and kinda deaf ones:
That makes Daddy noble and important.

I don’t know if it’s because of his job,
But Daddy is a fine listener;
He listens not just with his ears,
But his eyes.

Cry when I must, cry when I have to,
The crying feels less awful
When I spill my sorrows
To my one dear guy audience.

He’d look me in the eyes
Through those geeky lenses:
“It’s a small matter,” he’d say, “It’s OK.”
And that’s why Daddy’s so cool.

With him, everything’s OK.

This is a special feature essay celebrating Father’s Day.

You may also enjoy:

My Daddy, My Everything!

TINA and Timmy are twins. They are both ten. Tina is older by twenty-two minutes, and tends to have the upper hand when it comes to bullying her brother. When it comes to spelling, Tina also has the upper hand. She can spell big and complex words, like “benevolent” and “malevolent.” Even “disenfranchise” is a piece of cake. It doesn’t help that Timmy is not particularly gifted at spelling. END_OF_DOCUMENT_TOKEN_TO_BE_REPLACED

Emmy, the Doll With a Belly Button (Photo: Vivienne Yeo)

BIRTHDAYS are always fun because you are the star of the show. The spotlight is on you and the presents have a way of crawling up to you to give you a peek-a-boo. Sometimes, birthdays get a sad twist though, especially when your mother can’t be there with the presents and the candles. END_OF_DOCUMENT_TOKEN_TO_BE_REPLACED

My Writing Home offers insights into the writing process and reveals the most fundamental techniques of writing well, drawing upon the lessons of writers, world leaders, and journalists—anyone whose life depends on the craft of writing.

It is a community of budding young students who are excited about developing their point of view and discovering their own voice through clarity of thought and confidence in writing.